I watched, like, five minutes of He’s Just Not That Into You the other day ‘cuz it was on TV. And the first thing the main girl says, you know the part about how we all lie to each other about men and blah-blah-blah, is SO TRUE.

Let me explain. So, you and your boyfriend break-up. Actually, he doesn’t even have to be you boyfriend. The guy who could possibly be your boyfriend. Whatever. But something bad happens and all of a sudden you no longer have a boyfriend/almost boyfriend/imaginary boyfriend. It’s over and you go and you listen to Taylor Swift and alsomaybe some Justin Timberlake and it’s really not very healthy probably. Then, when you’ve eaten all of the ice cream in your house, you call your friends and you’re like, “waaaaah, we broke up/he has a girlfriend/I just realized that he isn’t real. Waaaaah.” AND HERE IS THE BIG LIE. Your friend responds with, “babe, you’re way too good for him/like, oh my gosh, you’re way prettier than her/I always thought maybe you were crazy.” And you’re like, “waaaaaah, I’ll never love anyone like I loved him/thought I liked him/imagined I loved them.”

There are multiple problems with the “babe, you’re way too good for him/like, oh my gosh, you’re way prettier than her” friend response:

That, my friend would be a much better response. Because, according to Ginnifer Goodwin, HE’S JUST NOT THAT INTO YOU. Or me. See, it’s great because it goes both ways! It’s actually kind of a comforting mantra. You see that your ex has a new girlfriend? He’s just not that into me. You see that your kind of boyfriend is actually dating another girl? He’s just not that into me. When you realize the guy you’ve been crushing on is only in your dreams? You might be crazy and maybe need psychiatric help. Or you’ve watched too many cheesy romances (it happens to all of us). He’s just not that into me. It’s kind of freeing, when you think about it. Now you can move on to awesome new guys who will be into you.

So next time, if my friends are reading this, please just tell me like it is because he’s obviously just not that into me. 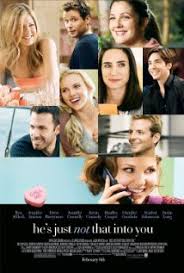 By the way, I totally love this movie and have seen it wayyy too many times.  You should watch it.  Picture via http://www.imdb.com/title/tt1001508/

I know it’s Halloween time, but I was just thinking about this sorta Christmas story and thought I’d share it with the world. Or maybe the one person reading this.
Last year, we went to a Christmas tree farm to get a Christmas tree (duh), and we took my grandma’s car because it’s a Subaru and if you know anything about Christmas tree shopping, you know that a lot of times the farms are located wayyy up on a mountain. So you have to go on a little gravel road and 4-wheel drive is awfully nice for that.
Anyways, my grandpa decides to come with us. But he wants to take his truck. Cool. So he’s like, “let’s go get gas.” And we’re like, “okay” because the cars are theirs, so what can we say?  He has us pull up to the gas pump so that his truck and the Subaru are located across from each other. He fills the truck up with gas and then, WHILE GAS IS STILL SPRAYING OUT OF THE PUMP, he switches over to putting gas in the Subaru. Now there is gas all over the Subaru. Classy, right? I can’t even figure out what was running through his head. Like, “hey, let’s fill up the cars with gas. And while we’re at it, we can hose the cars down. With gas.”
That’s not all though. No, that would not be enough for my grandpa. He has to go all out.
He doesn’t put the gas cap back over the tank of his truck, right? So he’s driving down the road (and eventually up a teeny gravel road) with the gas evaporating out of his car. Awesome.
Also, he likes to drive very fast. So on that nice winding gravel road, he’s driving almost as fast as Speed Racer.  And then stopping to wait for us in the middle of the road.  Too bad we didn’t rear end him.
There is a good ending, though.
We got a Christmas tree.
The End.
Merry Christmas in, like, two months.

People I Can Relate to.

My life is like a lot of comedies.  For example, when I saw Little Miss Sunshine, I almost didn’t laugh.  Because it was too much like my life.  Granted, none of us are going six months without speaking or planning on being in a beauty pageant any time soon, but that constant bickering?  Keeping the dead grandpa in the car?  That’s us.  (Except I was just kidding about the dead grandpa).

Parallels between Little Miss Sunshine and my life:

I have a very foul-mouthed uncle (similar to the grandpa in this wonderful movie modeled after my life).  He also smokes, but is attempting to quit.  He’s visiting us right now and decided to buy some fake cigarette.  Apparently it contains the nicotine without all of the tar and other stuff (whatever).  Every time he takes a drag, there’s this light that turns green on it.  And then he goes around breathing “water vapor” on us (it’s not smoke because you can’t smell it!).  Awesome.  Also, I’m sure my grandfather would be evicted from his retirement home if he were in one.

I’m pretty sure my grandmother wants to be Olive.  If she were younger and had the opportunity to, she’d want to be in a beauty pageant.  In fact, she’d probably still be telling us about it now.

I’m probably the quietest in my family.  Maybe I am the guy who stops talking for six months because he wants to join the Navy or something.  But that also sounds something like my brother would do.

And my mom doesn’t really portray any of the characters.  Were there any characters in that movie who were somewhat normal but also sometimes weird?  That’s her.  And probably me.

Okay, so it’s not an exact parallel.  Maybe it’s not one at all.  But I really related to the lives of those in Little Miss Sunshine.  It’s not so funny when it’s your reality, guys.